Hi Framers! This week’s Tuesday Tunes we are doing a Throw Back Tuesday! Here we are looking at one of the greatest dancers of all time-Gene Kelly. He once said if Fred Astaire was the “Cary Grant” of dance, then he was the “Marlon Brando”. 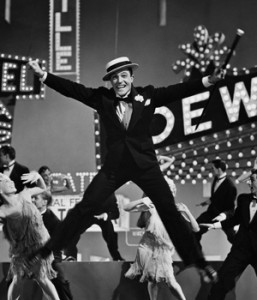 Eugene Curran “Gene” Kelly (August 23, 1912 – February 2, 1996) was an American dancer, actor, singer, film director, producer, and choreographer. Kelly was known for his energetic and athletic dancing style, his good looks and the likable characters that he played on-screen.

Metro-Goldwyn-Mayer was the largest and most powerful studio in Hollywood when Gene Kelly arrived in town in 1941. He came direct from the hit 1940 original Broadway production of “Pal Joey” and planned to return to the Broadway stage after making the one film required by his contract. His first picture for Metro-Goldwyn-Mayer was For Me and My Gal (1942) with Judy Garland. What kept Kelly in Hollywood were “the kindred creative spirits” he found behind the scenes at Metro-Goldwyn-Mayer. The talent pool was especially large during World War II, when Hollywood was a refuge for many musicians and others in the performing arts of Europe who were forced to flee the Nazis. After the war, a new generation was coming of age.

Those who saw An American in Paris (1951) would try to make real life as romantic as the real life they saw portrayed in that musical, and the first time they saw Paris, they were seeing again in memory the seventeen-minute ballet sequence set to the title song written by George Gershwin and choreographed by Kelly. The sequence cost a half million dollars (U.S.) to make in 1951 dollars. Another Kelly musical of the era, Singin’ in the Rain (1952), was one of the first 25 films selected by the Library of Congress for its National Film Registry. Kelly was in the same league as Fred Astaire, but instead of a top hat and tails Kelly wore work clothes that went with his masculine, athletic dance style. Gene Kelly died at age 83 of complications from two strokes on February 2, 1996 in Beverly Hills, Los Angeles, California.

The Famous Scene from Singin’ in the Rain

Tap Dancing on Roller Skates? Of course! Who can’t do that?

Just give him a creaky floor and a newspaper…

He was voted the 42nd Greatest Movie Star of all time by Entertainment Weekly.

Was named the #15 greatest actor on The 50 Greatest Screen Legends list by the American Film Institute.

Member of the jury at the Cannes Film Festival in 1959.

Awarded the National Medal of Arts by President Bill Clinton in 1994.

A stage version of “Singin’ in the Rain” was awarded the Laurence Olivier Theatre Award in 2001 for Outstanding Musical Production, with choreography by Kelly.

Martial arts stars Jackie Chan and David Carradine both cite him as an influence.

Is one of the many movie stars mentioned in Madonna‘s song “Vogue” and was a dance consultant for her 1993 “Girlie Show” tour.