This Tuesday we are spotlighting… 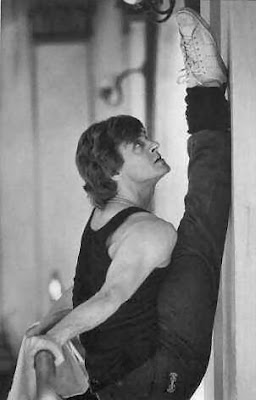 No one is born a dancer.You have to want it more than anything.

Baryshnikov was born in Riga, Latvia, then occupied and annexed by the Soviet Union. His parents were Russian, Alexandra (a dressmaker; maiden name, Kisselova) and Nicholai Baryshnikov (an engineer). Baryshnikov began his ballet studies in Riga in 1960. In 1964, he entered the Vaganova School, in what was then Leningrad (now St. Petersburg). Baryshnikov soon won the top prize in the junior division of the Varna International Ballet Competition. He joined the Kirov Ballet and Mariinsky Theater in 1967, dancing the “Peasant” pas de deux in Giselle.

Recognizing Baryshnikov’s talent, in particular the strength of his stage presence and purity of his classical technique, several Soviet choreographers, including Oleg Vinogradov, Konstantin Sergeyev, Igor Tchernichov, and Leonid Jakobson, choreographed ballets for him. Baryshnikov made signature roles of Jakobson’s 1969 Vestris along with an intensely emotional Albrecht in Giselle. While still in the Soviet Union, he was called by New York Times critic Clive Barnes “the most perfect dancer I have ever seen.”

On June 29, 1974, while on tour in Canada with the Kirov Ballet, Baryshnikov defected, requesting political asylum in Toronto, and joined the Royal Winnipeg Ballet. He also announced to the dance world he would not go back to the U.S.S.R. He later stated that Christina Berlin, an American friend of his, helped engineer his defection during his 1970 tour of London. His first televised performance after coming out of temporary seclusion in Canada was with the National Ballet of Canada in La Sylphide. He then went on to the United States.

From 1974 to 1978, he was principal dancer with the American Ballet Theatre (ABT), where he partnered with Gelsey Kirkland. He also worked with the New York City Ballet, with George Balanchine and as a regular guest artist with the Royal Ballet. He also toured with ballet and modern dance companies around the world for fifteen months. Several roles were created for him, including roles Opus 19: The Dreamer (1979), by Jerome Robbins, Rhapsody (1980), by Frederick Ashton, and Other Dances with Natalia Makarova by Jerome Robbins.

He returned to ABT in 1980 as dancer and artistic director, a position he held for a decade. On July 3, 1986, he became a naturalized citizen of the United States. From 1990 to 2002, Baryshnikov was artistic director of the White Oak Dance Project, a touring company he co-founded with Mark Morris. In 2003, he won the Prix Benois de la Danse for lifetime achievement. In 2005 he launched the Baryshnikov Arts Center in New York.

Baryshnikov made his American television dancing debut in 1976, on the PBS program In Performance Live from Wolf Trap. During the Christmas season of 1977, CBS brought his highly acclaimed American Ballet Theatre production of Tchaikovsky’s classic ballet The Nutcracker to television, and it has remained to this day the most popular and most often shown television production of the work, at least in the U.S. In addition to Baryshnikov in the title role, Gelsey Kirkland, Alexander Minz, and many members of the American Ballet Theatre also starred. The production is still shown by some PBS stations.  The Baryshnikov version of The Nutcracker is one of only two to be nominated for an Emmy Award. The other one was Mark Morris’ The Hard Nut, Morris’s intentionally exaggerated and satirical version of the ballet.

Baryshnikov also performed in two Emmy-winning television specials, one on ABC and one on CBS, in which he danced to music from Broadway and Hollywood, respectively. During the 1970’s and 1980’s, he appeared many times with American Ballet Theatre on Live from Lincoln Center and Great Performances. Over the years, he has also appeared on several telecasts of the Kennedy Center Honors.

Baryshnikov performed in his first film role soon after arriving in New York. He portrayed the character Yuri Kopeikine, a famous Russian womanizing ballet dancer, in the 1977 film The Turning Point, for which he received an Oscar nomination. He co-starred with Gregory Hines and Isabella Rossellini in the 1985 film White Nights, choreographed by Twyla Tharp; and he was featured in the 1987 film Dancers. On television, in the last season of Sex and the City, he played a Russian artist, Aleksandr Petrovsky, who woos Carrie Bradshaw relentlessly and takes her to Paris. He co-starred in Company Business (1991) with Gene Hackman.

On November 2, 2006, Baryshnikov and chef Alice Waters were featured on an episode of the Sundance Channel’s original series Iconoclasts. The two have a long friendship. They discussed their lifestyles, sources of inspiration, and social projects that make them unique. During the program, Alice Waters visited Baryshnikov’s Arts Center in New York City. The Hell’s Kitchen Dance tour brought him to Berkeley to visit Alice Waters’ restaurant Chez Panisse.

On July 17, 2007, the PBS News Hour with Jim Lehrer featured a profile of Baryshnikov and his Arts Center.

On April 11–21, 2012, Baryshnikov starred in a new play directed by Dmitry Krymov, titled In Paris. The play was presented in the Santa Monica College Performing Arts Center, at the Broad Stage. His co-star was Anna Sinyakina.

His next role was the stage adaptation of Anton Chekhov’s Man in a Case.

Albrechts’ variation from Act II of Giselle in 1977.

Danced with the Kirov Ballet, the American Ballet Theatre and the New York City Ballet.

Was artistic director with ABT and even ran his own class outside of ABT – Mikhail Baryshnikov’s School of Classic Ballet.

Was nominated for Broadway’s 1989 Tony Award as Best Actor (Play) for “Metamorphosis.”

Taught by ballet instructor Bella Kovarsky when he was a child.

Mikhail was a 2000 recipient of the John F. Kennedy Center Honors.