A Critical Assessment of “Drill Team” vs. “Concert Dance” Culture 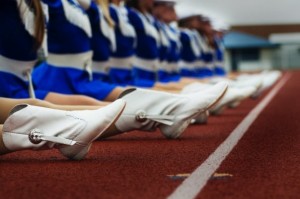 “Drill team” is its own culture in the dance world; it has its own set of expectations, language, behaviors, and customs.  A drill team is a group of trained dancers that perform precision in various dance genres during football halftime shows, local parades, and dance competitions. Over the years, I have noticed a regimented trend within drill team choreography.  After experiencing collegiate dance making processes and developing my own personal process, I believe the process of generating high school drill team choreography can be expanded and explored to parallel the ideals of concert dance making.

Typically, drill team choreographers have a limited amount of time with their dancers, while a wide range of choreographers in concert dance have residencies that last from a couple of days to a number of weeks.  Both processes also pose different outcomes.  The drill team choreographic process is final product based, whereas the concert dance world is more interested in the actual process. In attempts to introduce the drill team industry to the processes of concert dance, I believe there are various avenues to generate choreography.  Some examples of these avenues stem from Tere O’Connor’s “lines of research,” which is taken from a workshop with Headlong Dance Theater’s choreographers and Larry Lavender’s “IDEA model,” which comes from his book about “facilitating the choreographic process.”

As previously stated, Tere O’Connor’s “lines of research” would be an essential attribute to drill team dance making.  “Lines of research” is an investigation of particular obsessions that can be as simple as a hand gesture.  Exploring this single movement can then become a process in and of itself.  What is “interesting, evocative, [or] curious” about this particular movement and how many different ways can you explore this hand gesture through timing, direction, and manipulation? By investigating this single gesture, a person can be provoked to make an entire work about that one move (if they so desired).  This “lines of research” idea allows the movement to evolve and develop, rather than dictating what the movement should be.  In Tere O’Connor’s “blook” (his version of a book and blog), he mentions that he wants to “make work as a method for processing a constellation of ideas.”  In drill team, the final product is the goal, but by exploring O’Connor’s method, I would hope to see a shift in the mentality by allowing the process to be the rich, driving force of the work.

Another intervention of drill team that could be implemented is Larry Lavender’s “IDEA model.”  This model serves as a way to approach, generate, and manipulate choreography. “IDEA” is an acronym that stands for Improvisation, Development, Evaluation, and Assimilation.  While I believe drill team choreographers use some of these modes, I do think there can be more involvement with each of these four modes to enrich every aspect of drill team choreography.  In the chapter of Lavender’s book Contemporary Choreography: a critical reader, he mentions that all of these IDEA modes should be present in the creative operation of dance making.

The one mode that is not present in drill team is improvisation.  The mode of “Improvisation” is essentially what it sounds like, experimenting and improvising with different movements with different bodies.  Reflecting on my background of drill team, improvisation is unheard of and somewhat frowned upon in this industry. My intention with this method would be to develop a movement dialogue with the choreographer and dancers, while also making and inventing different movement through a more artistic, personal, and vulnerable place.

As explained above, there are numerous possibilities that are feasible for the drill team industry.  My ambition is to one day shift the paradigm of drill team choreography by infusing the principles of Larry Lavender and Tere O’Connor into the world of drill team by diving deeper into the work and creating richer developments and opportunities of movement in order to lead up to a process-based final product, instead of simply a final product. 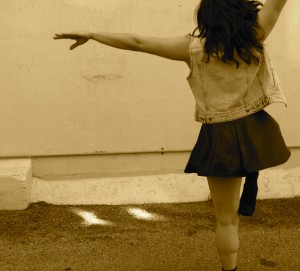 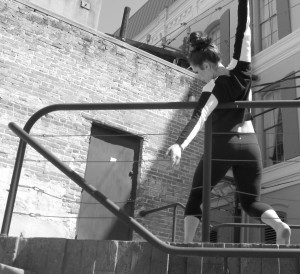 Angela Falcone, a Houston native, graduated from Friendswood High School in 2007.  She was a member of the drill team, the Friendswood Wranglerettes, where she held the title of Grand Marshal. After graduating, she followed her dream and tried out for the Kilgore College Rangerettes. She had the honor of being chosen as the Freshmen Sergeant and Swingster her freshman year, and received the greatest honor of being chosen as Captain her sophomore year. Following graduation from Kilgore College with an Associate in Fine Arts, she was accepted to the University of Texas at Austin, where she holds a B.F.A. in Dance.  Angela currently attends Texas Woman’s University in Denton, Texas where she is pursuing her M.F.A. in Dance.  She is specifically interested in shifting the paradigm of high school drill team by reinvigorating the choreographic process and bringing a somatic awareness to high school dancers’ bodies.