In 2019, ahead of a massive exhibit of his work appearing at the Tate Modern museum in London, artist Olafur Eliasson spoke with Mark Turner, art correspondent for The Guardian, about his installations, specifically about a piece titled “Your Blind Passenger.” The work is a room filled with fog and lit by colored fluorescent lights such that all that is visible to the viewer is a shallow, blurry colorscape. Only a few people are allowed into “Your Blind Passenger” at a time because it is so disorienting, making the viewer even more likely to feel detached and alone in an indistinct but colorful unknown. Eliasson said of the experience, “Very quickly you realise, and I mean this quite literally, that you are not completely blind after all, you have a lot of other senses which start to kick in.”

With this realization comes a shift, a transfer of attention. Something is taken away or blocked – in this case most of the visual information –  and the response of the viewer is to adjust how they engage with their surroundings. According to Eliasson, “it shows that the relativity of our senses is much higher than we think, we have it in our capacity to recalibrate or at least stop being numb” (emphases mine).

Eliasson’s work is often about jarring, all-encompassing alterations, like “Your Blind Passenger,” and they are often about connections that are simultaneous with fracture. Some of his visually quietest pieces sound the loudest social alarms. I feel like Eliasson’s work is made for coping with COVID and our ongoing strangeness. I feel like the quote above is instructional for living in a world where the the crisis alert is stuck at 11. 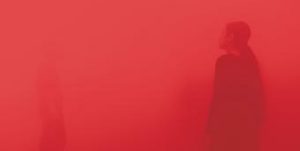 First – I think the quote is telling us – we need to be aware of these numb and underused senses. Then, bringing our attention to them, we can start to turn them on or turn them up. We can do work and practice actions to heighten the senses to the point that they become capable of nuance, of making and receiving meaning. Because our attention is finite – even when turned up to 11 – by attending to new areas, we are less reliant on the ones that used to dominate our awareness. We have recalibrated.

The issue of recalibration has been on Lydia Hance’s mind over the spring and summer. Accustomed to helping people bring attention to their (often underused, not quite nuanced) sense of movement, Lydia knows that practicing this set of sensations – practicing dance –  reduces stress and reduces the need to rely on other sensations for managing stress. Dance practice heightens the sense of the body in space, making movement more efficient and less stressful on the body. It also gives people another way to process and express emotion, again reducing the stress load we carry in our bodies and our thoughts. Lydia knew that during the stresses of quarantine and social unrest, people had lost some of their most powerful coping devices – face-to-face interaction with people we care for and freedom of movement both within and outside of one’s community. She knew that people needed a reset.

Lydia has a mighty set of creative friends, makers of one kind or another (or a whole bunch of kinds at once) who identified areas where a little attention to an underused skill goes a long way toward recalibration. Creative Reset is designed on these practices. Taken alone, the practices allow for recalibration. Taken multiply, you’ve got yourself a transformation!

Inset images: From “Room for One Color” Tate Modern 1997, Photos by Anders Sune Berg from olafureliasson.net